There is also information on how to buy the books, some links to related sites, notes on myself and the translators.

Andalucían Mysteries and More Andalucían Mysteries were the first to be published, and are short stories of crime and mystery set in the Axarquía, the part of Spain where I have lived since 1994. They were republished in one volume, Malaga Mysteries, which I still sell directly, but is no longer available online.

The next book, Twisted Tales, has some stories set in Spain but also some set in other parts of the world. East Side Stories is set down the east side of the UK, from Hadrian’s Wall to the Thames.

Sedella is a very different book, being a history of the village where I live, from prehistoric times to the present day, a mix of historical facts illustrated by fictional stories.

The Queen’s Agent is different again, being the first full length novel I have published, a spy story set in the time of Elizabeth I, set in London and Santiago de Compostela.

Death in the Sun and other stories returns to the short story genre, with 18 stories set once more in southern Spain.

Driven by Conflict, published in 2018, is a collection of stories about people caught up in conflicts of various kinds.

Suffer the little Children, published in 2019, is another full length novel, set in Teesside in the winter of 1946/7 and is a story of crime, suspense, intrigue and romance.

Twin Cousins, published in 2020, is a story of two boys born to twin sisters, one in north east England, the other in Andalucía

The pictures on this site are of myself and the locality where I live and work (and a few of where I have lived in the UK).

Wendy and I hope you enjoy the books.

Find me on goodreads.com 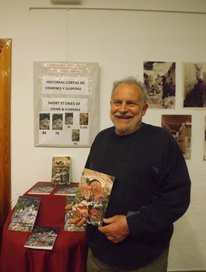